Muscle on the Streets - Sex/Life/Art with Juan Carlos Martinez 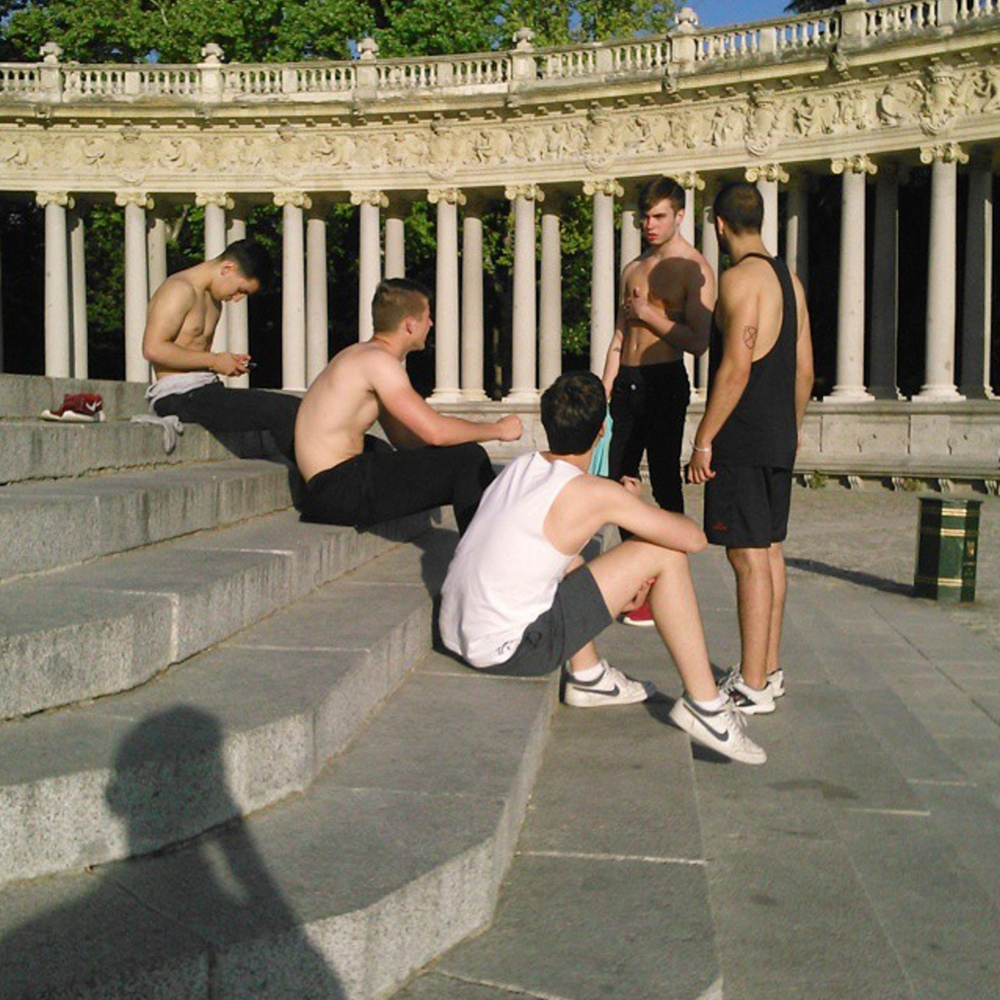 With their backs usually turned, we unabashedly gaze at the boys and men of Juan Carlos Martinez’s growing #SecretPhotographyArchive, a stream of erotic street shots featuring eye candy from a candid point of view. Guys at work, play or leisure are captured in compromising positions, often half-nude and engaging in some predominantly male activity. While Martinez does not get permission from his subjects, he grants his audience a pass to stare as long as desired from the safety of their own mobile device. This process recalls the work of the late Czech Republic photographer Miroslav Tichy, who surreptitiously photographed women on the streets of Kyjov throughout the 1960s and 1970s. Tichy’s ghostly images not only conjured a fascination with voyeurism, the male spectator and image ethics, but also created a historical document of the women of the city filtered through his lens of desire. 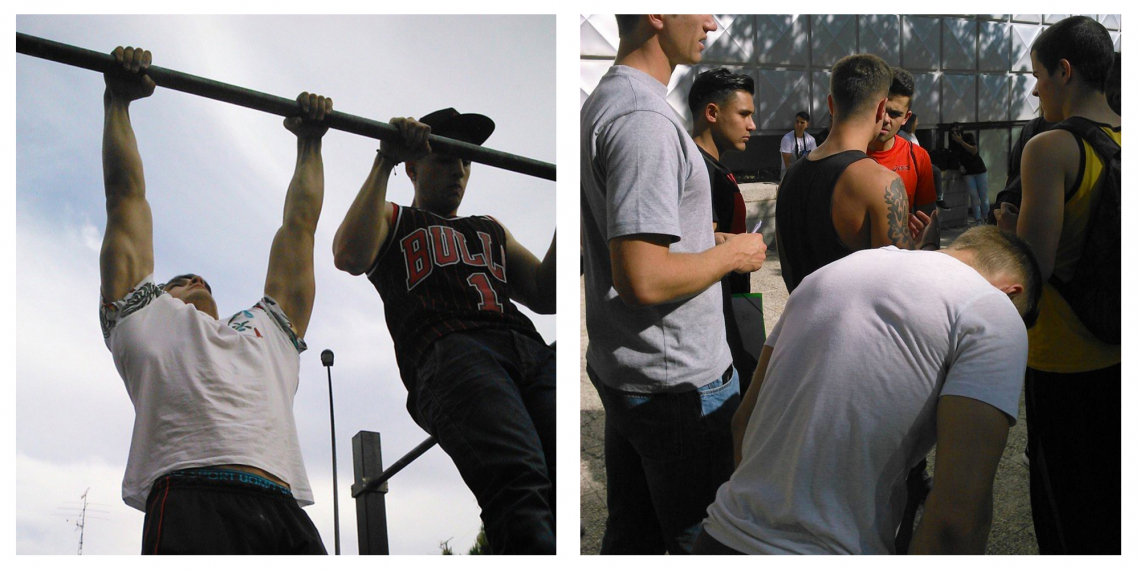 In Juan Carlos Martinez’s body of work, the themes of privacy, voyeurism and exhibitionism are interwoven with modern surveillance politics and control technologies. The hashtag “#papped” is now part of our popular lexicon, used to describe covertly taking and sharing photos of people. The #SecretPhotographyArchive arrives with the immediacy of Instagram, delivering a real-time flow of virility from unsuspecting bodies, unknowingly receiving a slew of likes and comments from users worldwide. On occasion, we catch a trace of Martinez’s physical presence. While the boys and men of his archive flex at work-out stations, avoid eye contact during transport or stare into their own mobile devices, Martinez’s shadow, clothing or body takes up part of the frame. The concealment is apparent. Reviewing the series en masse, Martinez conveys a male world through a homoerotic filter, an observational sex-specific examination of behavior, longing and sensuality. Sexuality exists regardless of a public or private context, but where does it belong? Martinez’s series provokes the notion of where sexual expression is relegated and acceptable by making his lust visible for anyone to access. The following interview was conducted in Spanish with English translation provided by Zakaria Alilech. 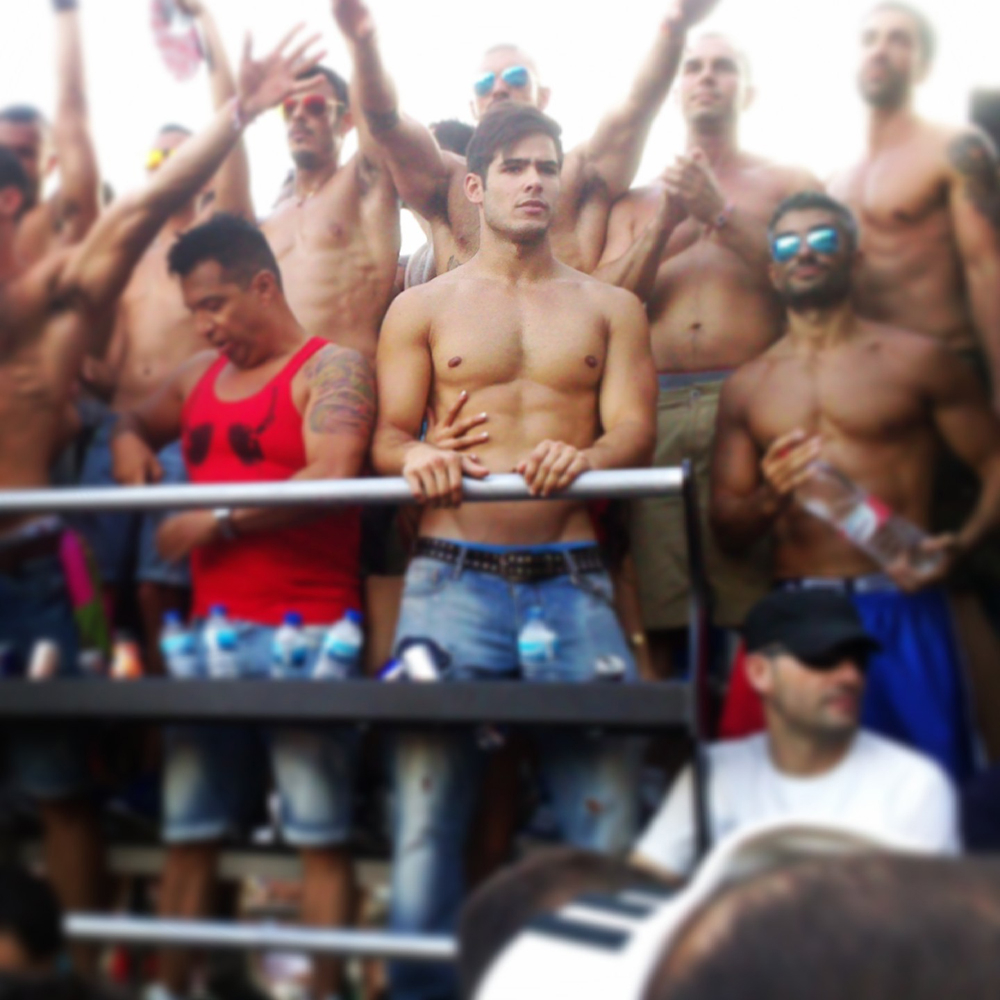 Do you go out into the streets seeking men to photograph and let those experiences guide you, or do you let the opportunities present themselves naturally as you go about your day?

The opportunities show up because I constantly look for them. I need to leave witnesses about those sublime and ephemeral events. I’m always vigilant because you never know where they are going to happen, which is what makes the project exciting. Of course, there are places that potentially offer more possibilities, but the images are always stolen, which means they happen casually and spontaneously. I prefer environments where the prototypes of hegemonic masculinity are predominant, because they represent the culmination of virility in our culture.

There is a nostalgic component in all this; with this work, I want to immortalize splendorous moments of youth, virility and beauty. That’s why capturing them is necessary to retain them for a long time through photography. If you don’t do so, you lose them. 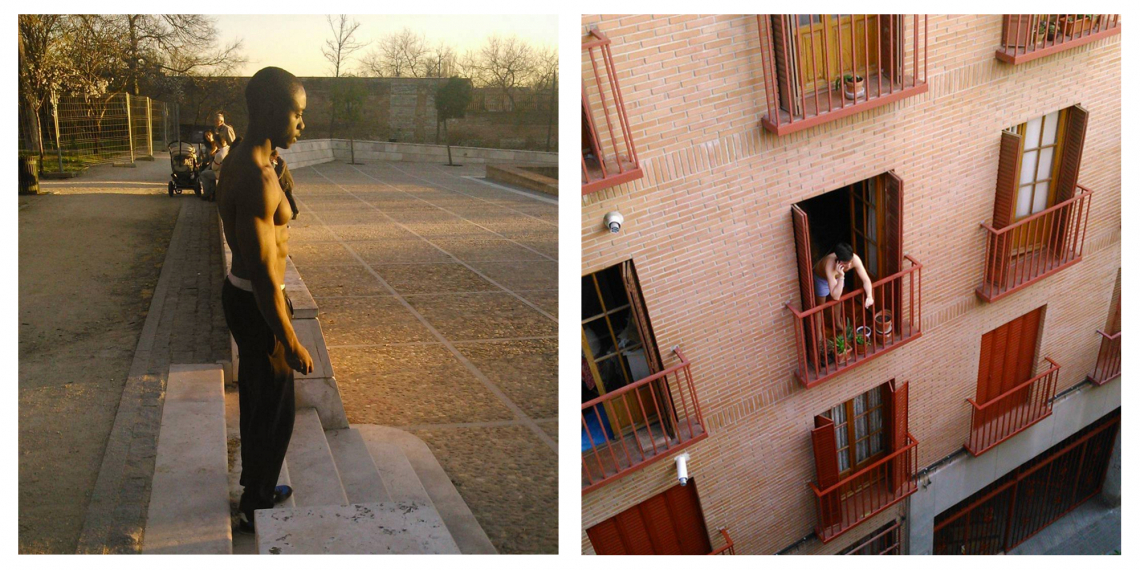 I eroticize the way I approach attractive strangers, making some situations intriguing even though they are not in principle, thanks to the expiating, secret, and intriguing character of a hidden camera. It would have been impossible with other types of cameras. It’s intentionally done this way.

Have any interactions occurred between you and your subjects for the Secret Photography Archive series? If so, please share stories.

No, I try not to interact with them, with some exceptions, because I’m not invisible. They are strangers and maintaining that distance inspires me. They are like fictional characters. Although I start from reality, I try to detach myself from it. 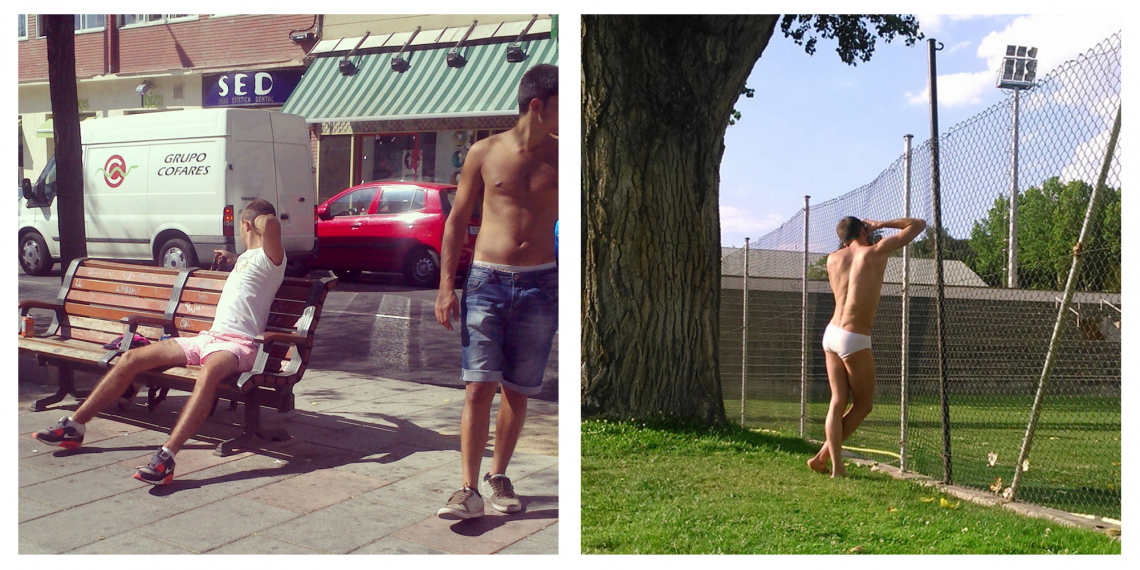 Men cruising for sex in places like parks, restrooms, bathhouses and beaches would potentially yield more explicit sexual imagery. Do you avoid these situations for your Secret Photography Archive?

My way of taking pictures has a lot to do with desire. I want to eroticize and praise daily moments that don’t have the pretense of being hot or sexy right from the start. That is why I prefer approaching boys in public spaces and normal environment where the straight boy-next-door is predominant. Those beauty canons are closer to fantasy. Approaching these types of boys, who are all over, is a more ambitious and tricky challenge. They make me feel as though there are more risks because my look is a statement. 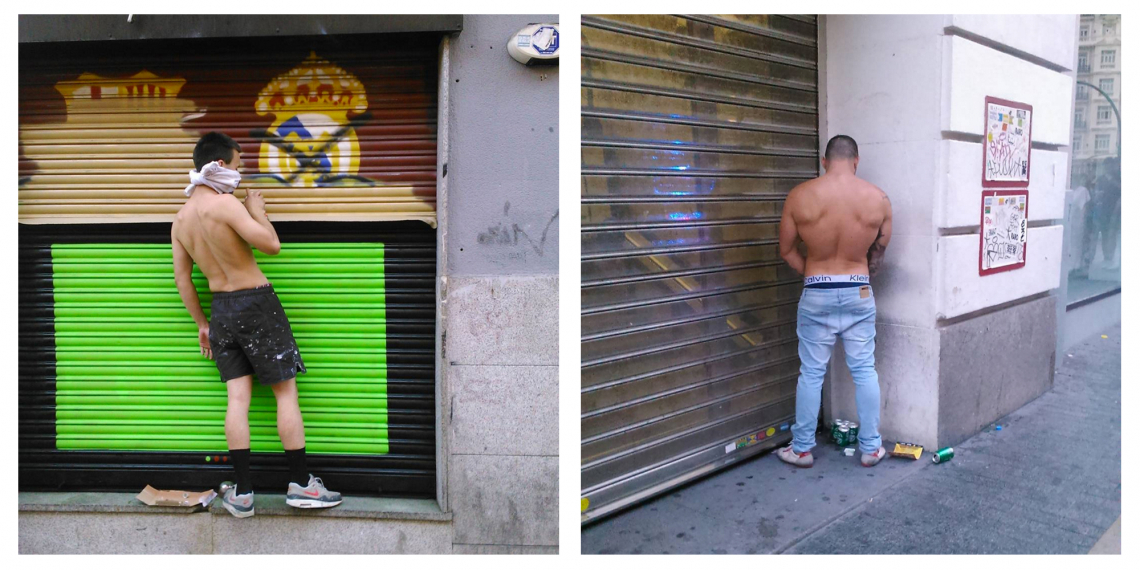 I’m very curious about your thoughts on the power dynamics and politics of control and consent in regards to sexual imagery. Men who’ve photographed women in this way may be labeled as “perverts” as topics of consent and exploitation surround the issue. Have you faced this type of criticism from audiences?

I’m very interested in that subject and I take it constantly into consideration. How the perception of an image can change according to its context, use or intention… It’s a tricky and cumbersome subject that affects me and I am aware of that. So far, I haven’t had any problem, but it’s a controversy that I want to continue questioning with projects as an image creator.

In a way, I allow myself to do that as a start to create evocative and attractive images. My photography project aims to transcend the vicissitudes of copyright that will lose their importance as time goes by. Stealing images makes you feel bad sometimes, because it’s an act of betrayal after all, but it’s necessary to obtain naturalness. In 100 years, we won’t care about who appears on the picture. What remains is the image, the intention, the aesthetics and the meaning of the project. The discourse it provides to photography and art. 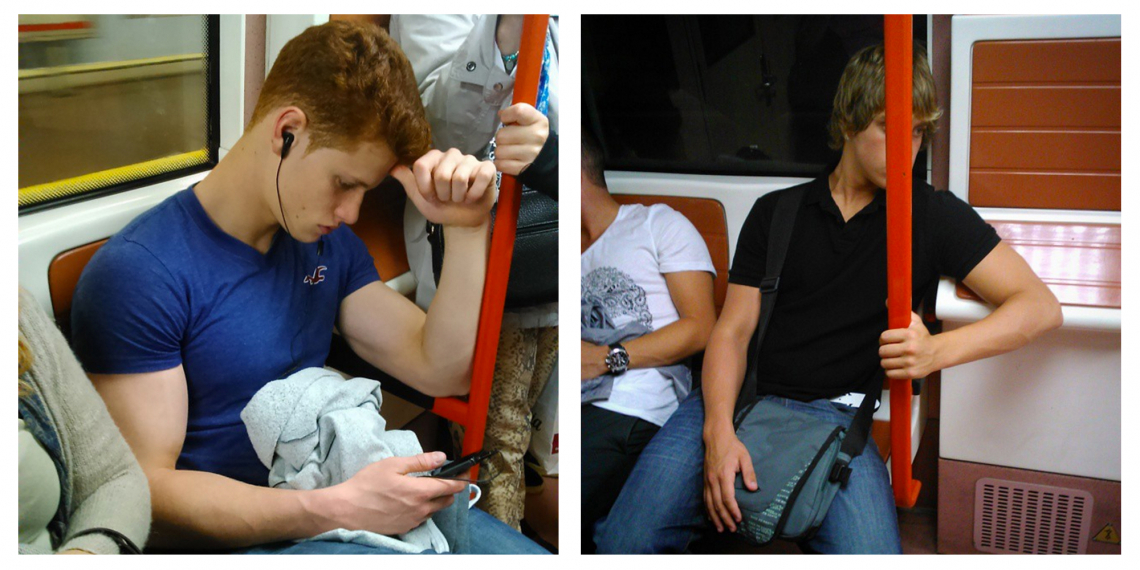 Why do you choose Instagram as the primary way to distribute this work to your audience? Would you ever present the Secret Photography Archive outside of Instagram, like either as prints for a gallery or perhaps a book?

It allows me to edit more quickly anywhere and show instantly, which is a fundamental element in my work. I’m able to show the audience those familiar but sublimated images almost in real time. I used to meditate a lot before I showed anything. With Instagram, the fieldwork, the doubts and the mistakes are visible. The interests and preferences show up in the process, which also helps you be present as a creator. 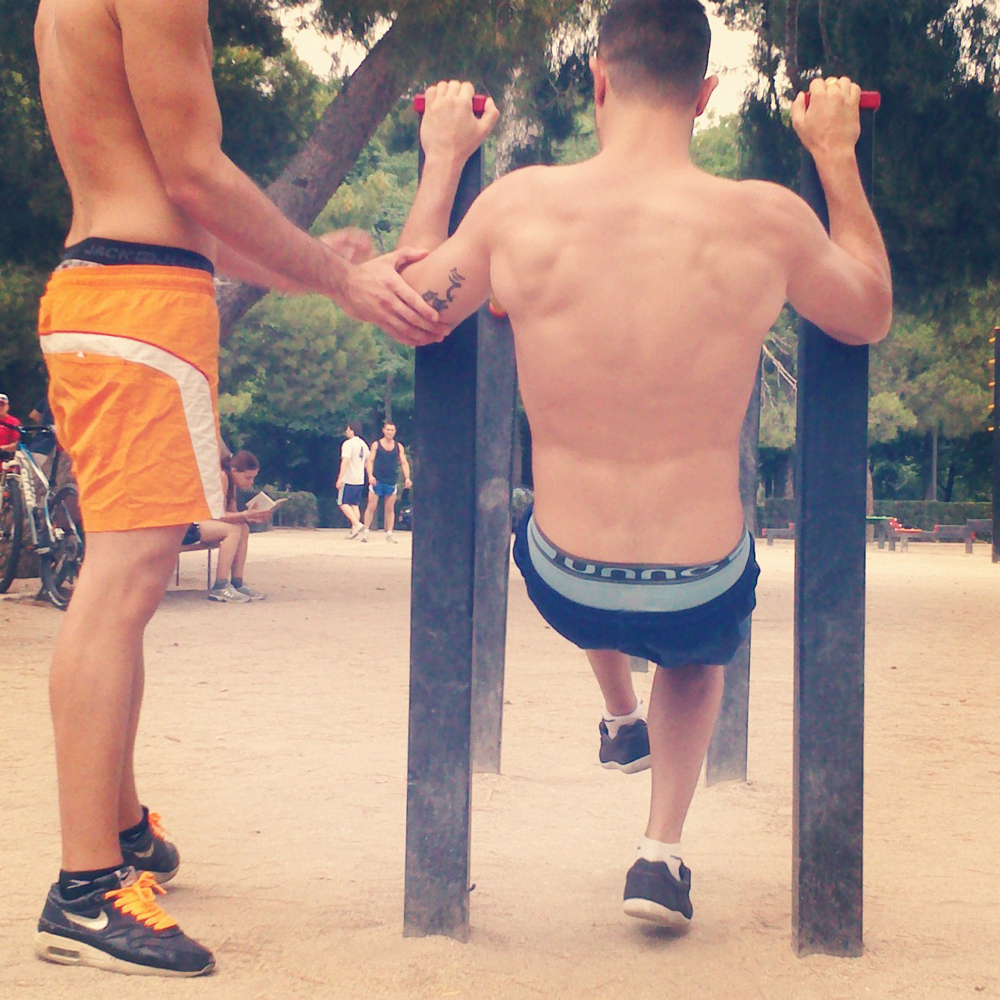 The archive is a container where I keep accumulating images like trophies, which helps create polyptychs uniting the images that complete or enrich each other in terms of theme, composition or color similarities. These combination make the stories vary in a fragmented narration. As a package, the archive is still documental which helps make socio-anthropological conclusions on masculinity and desire.

I have exhibited some pieces in various occasions and I am currently preparing to publish the project as a book. 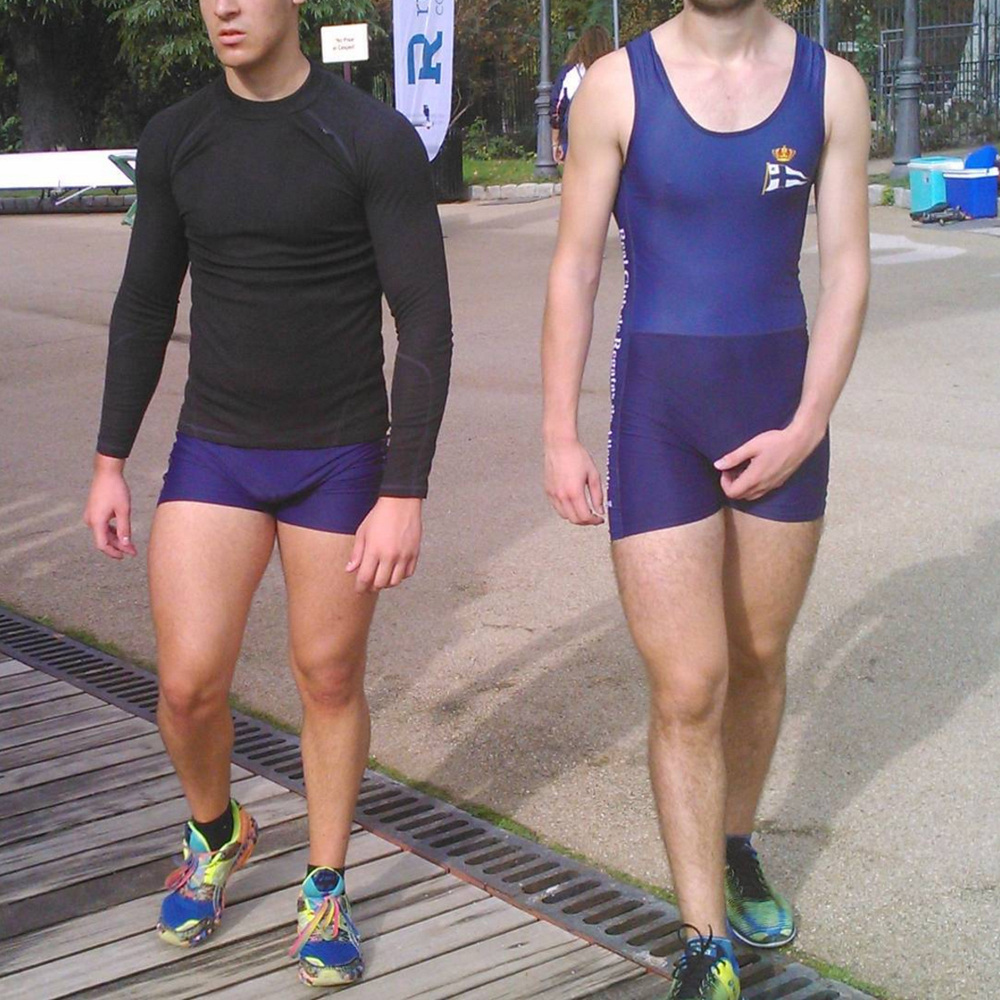 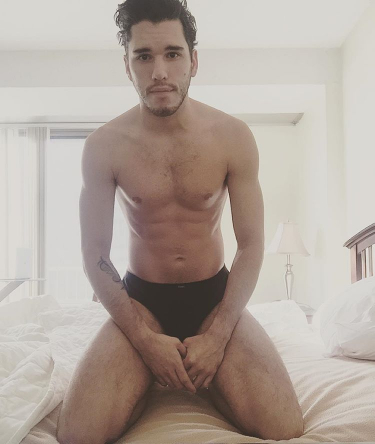 While Instagram is a great place to see what kinds of selfies all your best friends are taking, and to distract yourself from work with cute dogs and cats, it remains one of the best places to peep on some of the world’s prettiest people. And the great thing about pretty people is that they usually aren’t too afraid to strut their stuff for the great big world of the World Wide Web to see. So to spice up your daily photo scroll, here are Dandy Dick’s picks for the hottest hunks on Instagram right now. Follow now and thank us later.