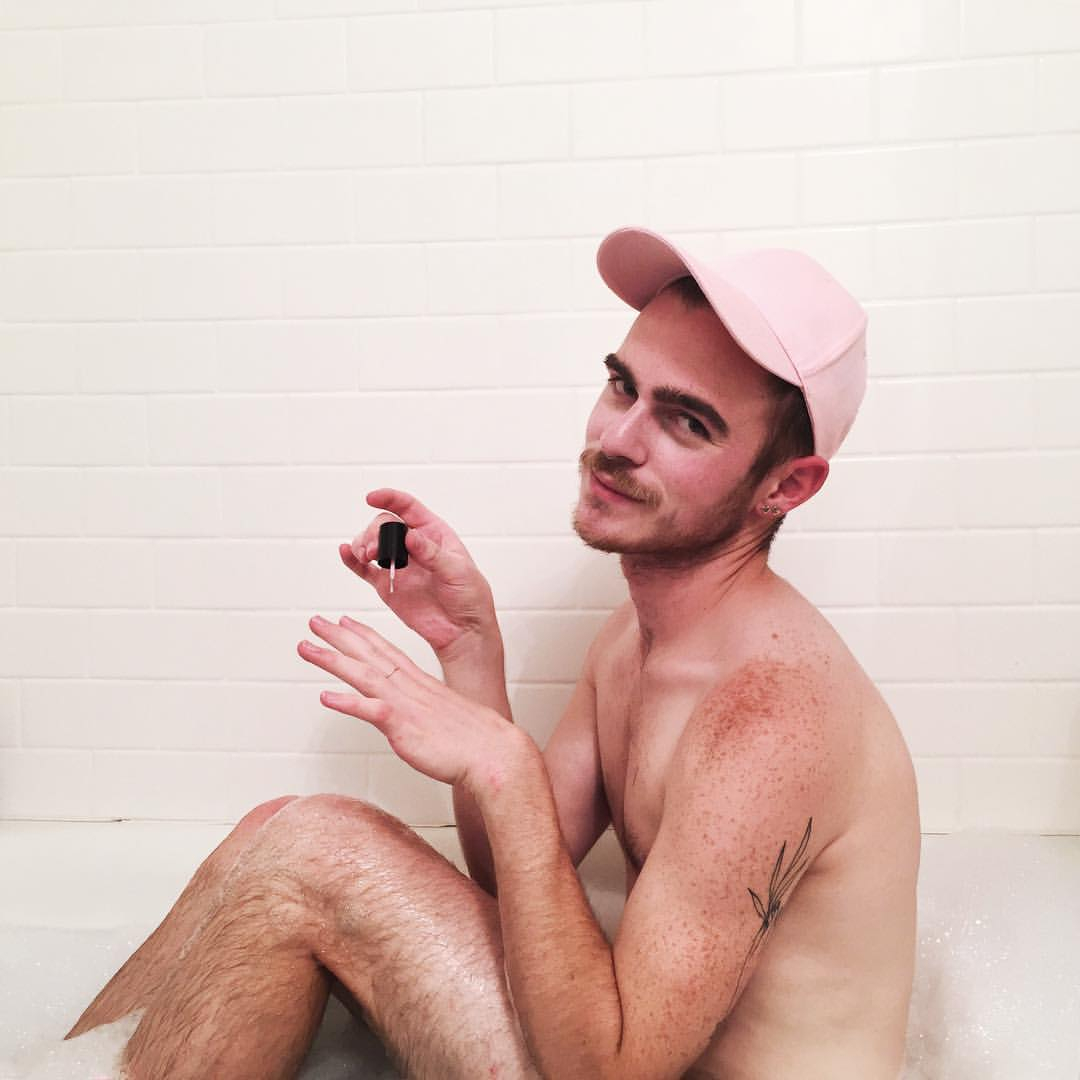 Andy Simmons is the young illustrator behind this vibrant world of #BubblegumFem boys known as Hey Rooney, currently operating out of Salt Lake City. Striking a pose with splash of neon color on the lips and nips, these pin-ups are drawing big social media traffic with nearly 20k followers on his Instagram alone. Gay language and subculture has evolved as dating apps have dominated how we meet up and hook up. New phobic taglines like "Masc 4 Masc", "No Fats", "No Fems", "No Blacks", "No Asians" etc. plague online dating venues. Sex culture is no stranger to shallow standards, but that does not mean it should be excused of criticism. Hey Rooney’s clever designs ironically interpret these terms into dazzling, day-glo slogans. Blushing hunks and flower babes don pastel beards and sultry poses, flipping conventional concepts of masculinity on its head. His feed often includes his girly take on “Masc 4 Masc” superimposed on celebrity figures, making it a highly sought after T-shirt that quickly disappeared from his online store. He is cultivating a new brand of proud femme proclamation for cisgendered gay guys, one eye-catching piece at a time. Rooney himself is as adorable as his art, usually with a mischievous smirk and little else, complete with glitter and blush. We spoke with him on gender, prejudice within the gay community and being reunited with his childhood self. 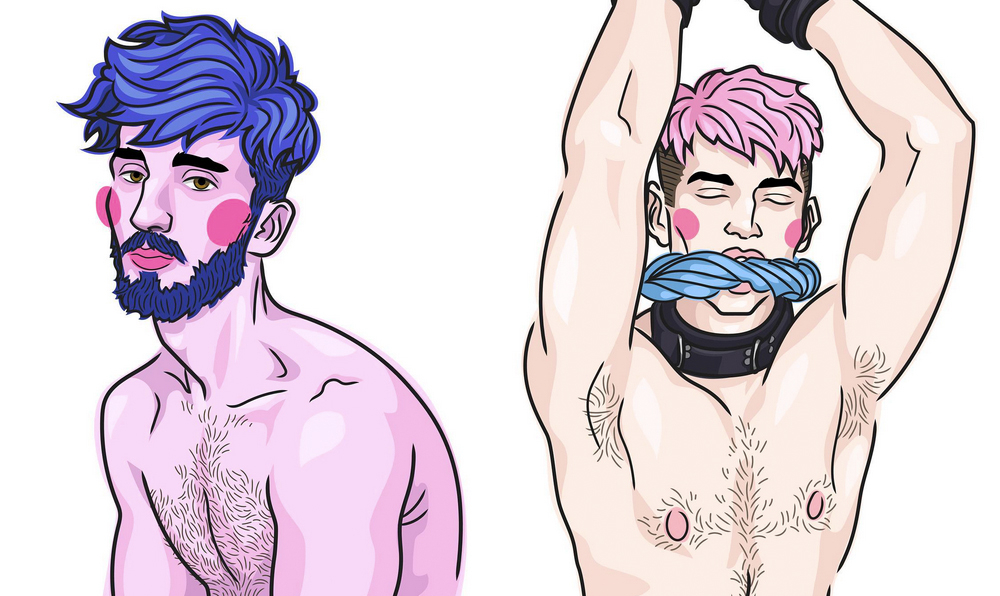 Do you take inspiration from models or friends? Who are the real-life boys behind the illustrations?

HR: My illustrations are usually a conglomerate of a few references. Some online, some improvised. I also take inspiration from photographers whose work I love! I essentially illustrate their artwork. I recreate it through my own little eyes. 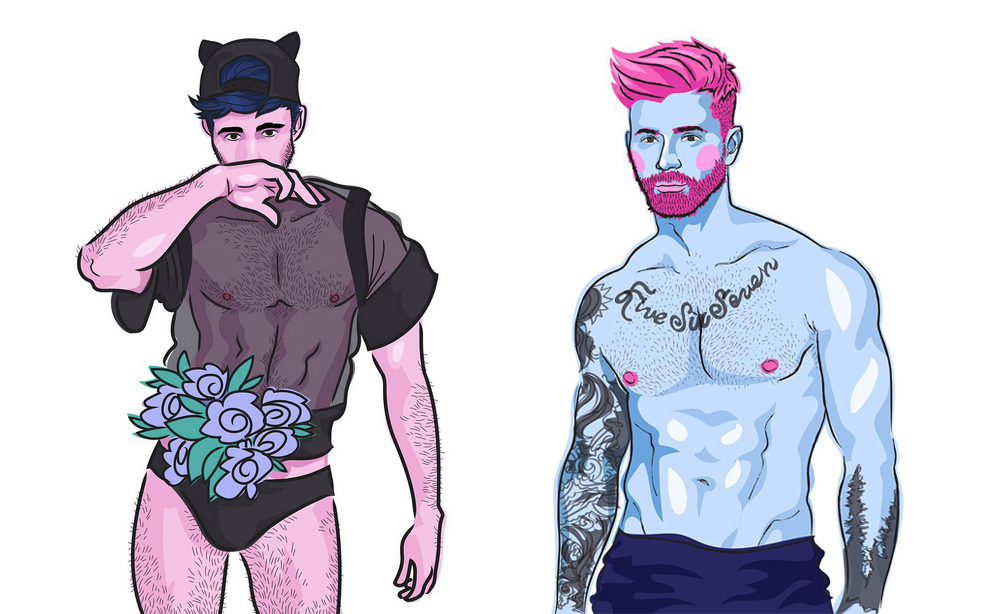 When and how did you start your work, and how did it arrive at the bubblegum pin-up boys we see today?

HR: As far as drawing goes, I've been making artwork since I can remember. Whether we can call it "artwork" or not is another matter. ;) I've always been drawn to figure work in some form or another. As I've grown into my sexuality, I feel a responsibility to represent that sexuality (at least my own experience with my sexuality) through artwork. Somehow, that has reunited me with my 7-year-old self, who I feel was the last "version" of myself to express himself freely, prior to understanding more about what was acceptable for boys to like and do. It will come as no surprise that 7-year-old Rooney had a Barbie collection and was in love with anything pink. I didn't expect that! But it seems to make sense. Combine that with a desire to explore and express my sexuality, and bam. Bubblegum Fem boys are the natural result. 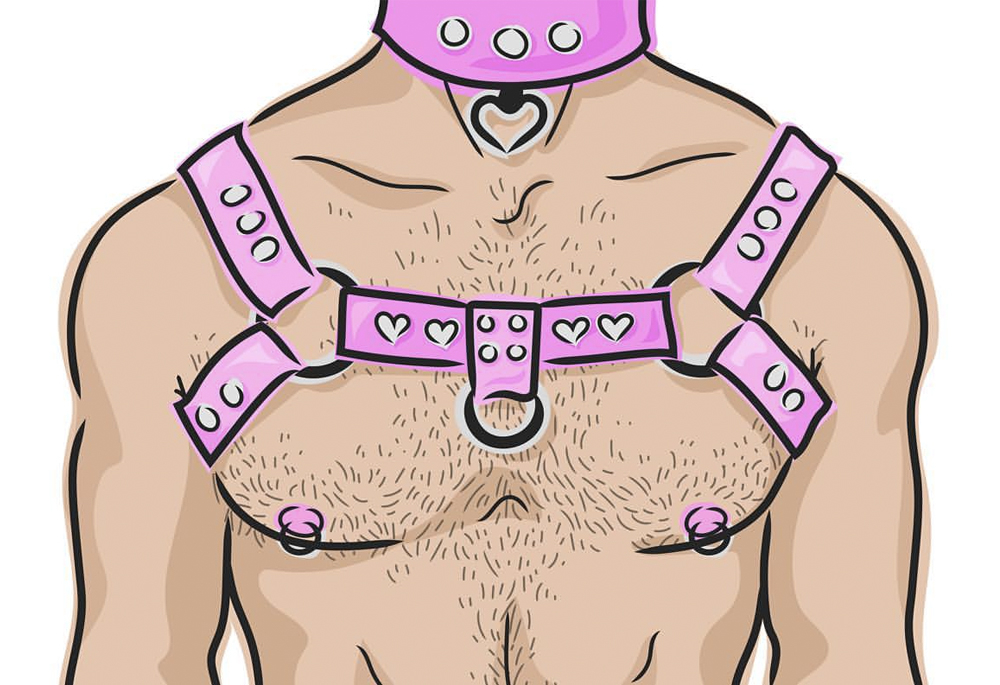 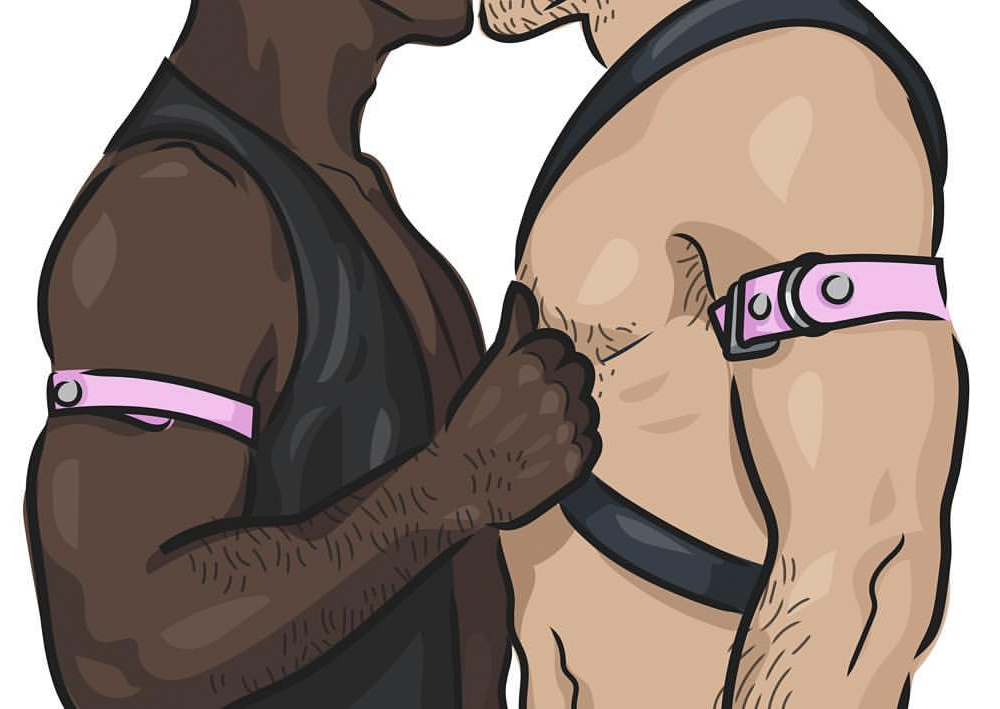 Would you describe your work as political? How do you feel about masculine-exclusive or racially biased gay terminology that’s so prevalent in online dating?

HR: I don't think I realized my work was political until a good friend pointed it out to me. I was just saying what I wanted to say! Yes, though, I do think it has a political flavor. I don't always, but I hope to make people uncomfortable. I hope to challenge what people think. That's an aspiration. I'm simultaneously fascinated and appalled by people who shamelessly clarify their masc and racial preferences in online profiles. And those are only two of many prejudices I see blasted across gay dating apps. It's difficult because we really do have preferences. We have certain traits (physical or otherwise) that we are most attracted to. There is a line, though, where those become prejudices and not just preferences. I'm interested in exploring that. 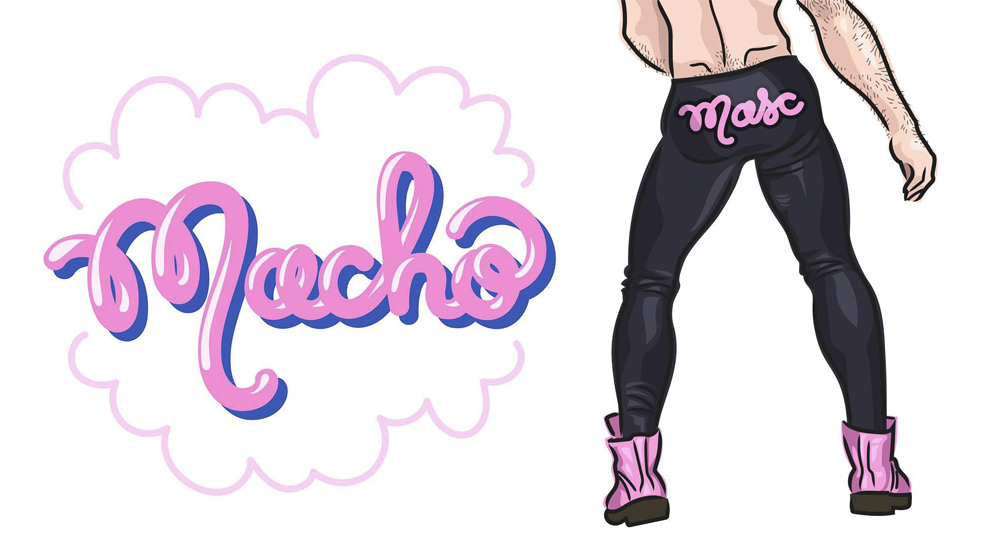 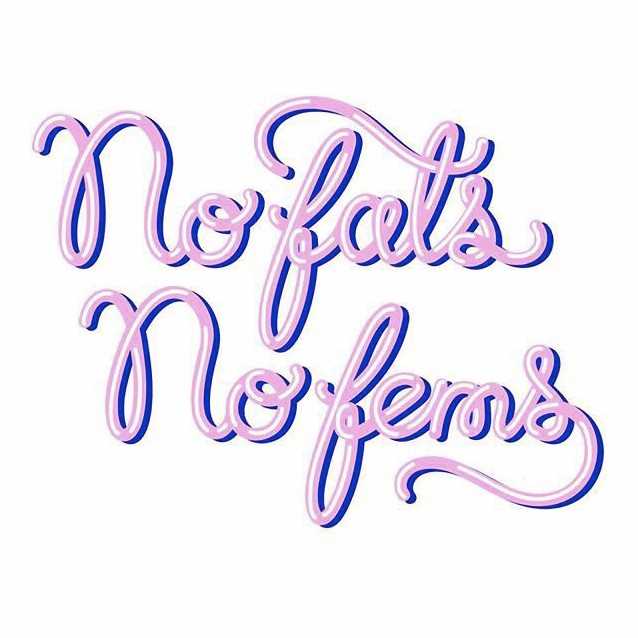 How would you describe your own sexuality, gender identity, fluidity, and performance?

HR: I'm certainly gay. And in a culturally expected, very feminine way, VERY GAY. Glitter. Pink. I want it all. I identify as male. I enjoy being a man; I value that. I also value the freedom to express myself in very feminine ways. In that sense, I suppose I'm more gender fluid. I love wearing crops tops and glittered cheeks when I go out. I don't analyze which "masc" or "femme" elements I'm incorporating, though, it's more like I'm wearing and acting how I want. And that includes a fair mix of both. 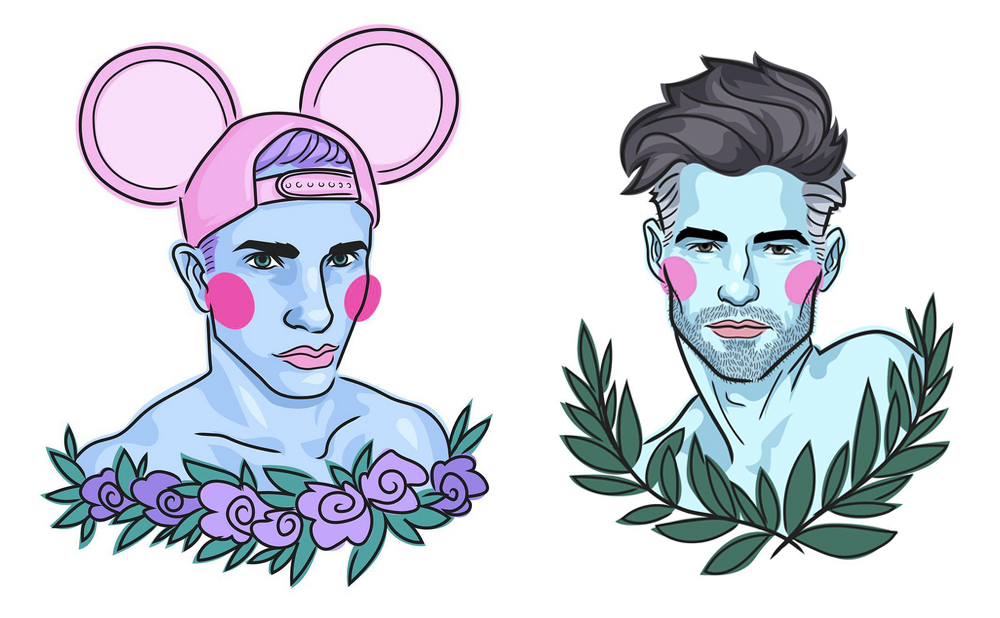 Have you faced any opposition to your designs either from within or outside of the gay community?

As of yet? Not really! I wish I had some real juicy story to share. There are a handful of people who haven't understood that I'm making a joke by putting "Masc 4 Masc" in pink, bubbly cursive. Other than that, I have been blown away by the support, the understanding, and the kindness of people regarding my work. 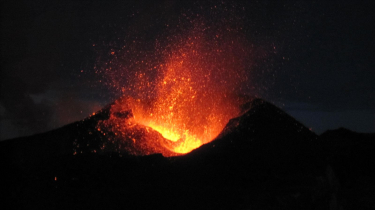 Our eruptions and disasters. Despite these, really, trust me, we can’t be beat. Set us up and watch us blow. Now and then we fail and admit defeat. I’ve been up all night waiting for Jimmy to come over. He just got back from a semester abroad reading French and he said he really missed me. I’ve been laying on my bed listening to the Slits and reading about Pompeii and at 2:15, when I’d just about had it, Jimmy comes over. He is my height and size, but he’s a couple years younger and with dark features. He is an air sign and I can’t decide if he is: psychic, silly, stupid and psychotic. I have decided that he’s sexy. 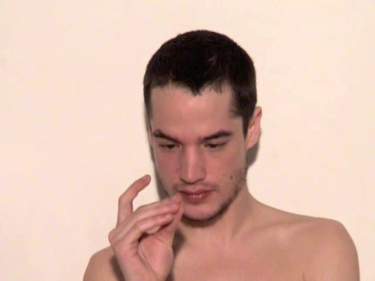 On Friday, November 27th, SomoS presents the first posthumous exhibition of the much beloved Brian Tennessee Claflin, aka Prix, Berlin’s champion nightlife provocateur and renegade artist. “The Five Senses” is a yet unseen five-channel video installation and studio performance featuring a young Claflin invoking sight, scent, touch, taste, and hearing. Created alongside Italian artist Greta Frau and by courtesy of the Brain Tennessee Claflin Foundation who preserves his brief but prolific career, “The Five Senses” seems a fitting choice for the first review of Claflin’s impact after his tragic death in 2014.